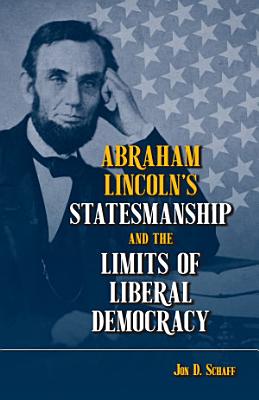 This bold, groundbreaking study of American political development assesses the presidency of Abraham Lincoln through the lenses of governmental power, economic policy, expansion of executive power, and natural rights to show how Lincoln not only believed in the limitations of presidential power but also dedicated his presidency to restraining the scope and range of it. Though Lincoln’s presidency is inextricably linked to the Civil War, and he is best known for his defense of the Union and executive wartime leadership, Lincoln believed that Congress should be at the helm of public policy making. Likewise, Lincoln may have embraced limited government in vague terms, but he strongly supported effective rule of law and distribution of income and wealth. Placing the Lincoln presidency within a deeper and more meaningful historical context, Abraham Lincoln’s Statesmanship and the Limits of Liberal Democracy highlights Lincoln’s significance in the development of American power institutions and social movement politics. Using Lincoln’s prepresidential and presidential words and actions, this book argues that decent government demands a balance of competing goods and the strong statesmanship that Lincoln exemplified. Instead of relying too heavily on the will of the people and institutional solutions to help prevent tyranny, Jon D. Schaff proposes that American democracy would be better served by a moderate and prudential statesmanship such as Lincoln’s, which would help limit democratic excesses. Schaff explains how Lincoln’s views on prudence, moderation, natural rights, and economics contain the notion of limits, then views Lincoln’s political and presidential leadership through the same lens. He compares Lincoln’s views on governmental powers with the defense of unlimited government by twentieth-century progressives and shows how Lincoln’s theory of labor anticipated twentieth-century distributist economic thought. Schaff’s unique exploration falls squarely between historians who consider Lincoln a protoprogressive and those who say his presidency was a harbinger of industrialized, corporatized America. In analyzing Lincoln’s approach, Abraham Lincoln’s Statesmanship and the Limits of Liberal Democracy rejects the idea he was a revolutionary statesman and instead lifts up Lincoln’s own affinity for limited presidential power, making the case for a modest approach to presidential power today based on this understanding of Lincoln’s statesmanship. As a counterpoint to the contemporary landscape of bitter, uncivil politics, Schaff points to Lincoln’s statesmanship as a model for better ways of engaging in politics in a democracy.

Abraham Lincoln’s Statesmanship and the Limits of Liberal Democracy

Lincoln: The Fire of Genius

Authors: David J. Kent
Categories: History
Abraham Lincoln had a lifelong fascination with science and technology, a fascination that would help institutionalize science, win the Civil War, and propel th

Authors: Thomas R. Flagel
Categories: History
More books have been written about Abraham Lincoln than perhaps any other figure in Western civilization, save Jesus of Nazareth, and with so much material avai

Authors: Richard Stevens
Categories: Political Science
This book focuses on the political thought of American statesmen. These statesmen have had consistent and comprehensive views of the good of the country and the

Law, Politics and the Judicial Process in Canada

Authors: Benjamin A. Kleinerman
Categories: Law
Examines both the peril and the promise of presidential power to clarify that what can destroy our Constitution can--if the threat is dire--also save it. An unu

Yale Journal of Law & the Humanities

Authors: Kenneth L. Deutsch
Categories: History
Despite the voluminous literature on the central figure in American history, no other book in the field of political science compares toLincoln's American Dream