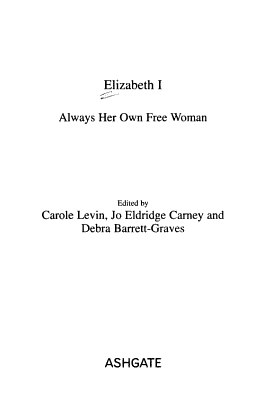 This interdisciplinary collection by historians, cultural critics and literary scholars examines a variety of the political, social, and cultural forces at work during the English Renaissance and beyond, forces that contributed to creating a wealth of artistic, literary and historical impressions of Elizabeth, her court, and the time period named after her, the Elizabethan age. Articles in the collection discuss Elizabeths' relationships, investigate the advice given her, explore connections between her court and the arts, and consider the role of Elizabeth's court in the political life of the nation. Some of the ways Elizabeth was understood and represented demonstrate society's fears and ambivalence about early modern women in power, while others celebrate her successes as England's first and only unmarried queen regnant. This volume will be of interest to scholars and students in a wide range of disciplines, including literary, cultural, historical and women's studies, as well as those interested in the life and times of Elizabeth I.

Elizabeth I, Queen of England

The Catholic Subjects of Elizabeth I

Jewels and Plate of Queen Elizabeth I