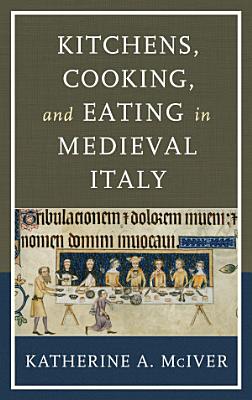 The modern twenty-first century kitchen has an array of time saving equipment for preparing a meal: a state of the art stove and refrigerator, a microwave oven, a food processor, a blender and a variety of topnotch pots, pans and utensils. We take so much for granted as we prepare the modern meal – not just in terms of equipment, but also the ingredients, without needing to worry about availability or seasonality. We cook with gas or electricity – at the turn of the switch we have instant heat. But it wasn’t always so. Just step back a few centuries to say the 1300s and we’d find quite a different kitchen, if there was one at all. We might only have a fireplace in the main living space of a small cottage. If we were lucky enough to have a kitchen, the majority of the cooking would be done over an open hearth, we’d build a fire of wood or coal and move a cauldron over the fire to prepare a stew or soup. A drink might be heated or kept warm in a long-handled saucepan, set on its own trivet beside the fire. Food could be fried in a pan, grilled on a gridiron, or turned on a spit. We might put together a small improvised oven for baking. Regulating the heat of the open flame was a demanding task. Cooking on an open hearth was an all-embracing way of life and most upscale kitchens had more than one fireplace with chimneys for ventilation. One fireplace was kept burning at a low, steady heat at all times for simmering or boiling water and the others used for grilling on a spit over glowing, radiant embers. This is quite a different situation than in our modern era – unless we were out camping and cooking over an open fire. In this book Katherine McIver explores the medieval kitchen from its location and layout (like Francesco Datini of Prato two kitchens), to its equipment (the hearth, the fuels, vessels and implements) and how they were used, to who did the cooking (man or woman) and who helped. We’ll look at the variety of ingredients (spices, herbs, meats, fruits, vegetables), food preservation and production (salted fish, cured meats, cheese making) and look through recipes, cookbooks and gastronomic texts to complete the picture of cooking in the medieval kitchen. Along the way, she looks at illustrations like the miniatures from the Tacuinum Sanitatis (a medieval health handbook), as well as paintings and engravings, to give us an idea of the workings of a medieval kitchen including hearth cooking, the equipment used, how cheese was made, harvesting ingredients, among other things. She explores medieval cookbooks such works as Anonimo Veneziano, Libro per cuoco (fourtheenth century), Anonimo Toscano, Libro della cucina (fourteenth century), Anonimo Napoletano (end of thirteenth/early fourteenth century), Liber de coquina, Anonimo Medidonale, Due libri di cucina (fourteenth century), Magninus Mediolanensis (Maino de’ Maineri), Opusculum de saporibus (fourteenth century), Johannes Bockenheim, Il registro di cucina (fifteenth century), Maestro Martino’s Il Libro de arte coquinaria (fifteenth century) and Bartolomeo Sacchi, called Platina’s On Right Pleasure and Good Health (1470). This is the story of the medieval kitchen and its operation from the thirteenth-century until the late fifteenth-century.

Authors: Katherine A. McIver
Categories: Cooking
The modern twenty-first century kitchen has an array of time saving equipment for preparing a meal: a state of the art stove and refrigerator, a microwave oven,

Authors: Odile Redon
Categories: Cooking
Reconstructed from fourteenth- and fifteenth-century sources, presents recipes from the cuisine of the Middle Ages, along with an explanation of the history and

Authors: Meredith Books
Categories: Cooking
Presents a collection of recipes from a variety of chefs and celebrities, along with the hosts, of the "Today Show."

The Art of Cookery in the Middle Ages

Authors: Melitta Weiss Adamson
Categories: Social Science
New light is shed on everyday life in the Middle Ages in Great Britain and continental Europe through this unique survey of its food culture. Students and other

A Drizzle of Honey

Authors: David M. Gitlitz
Categories: History
When Iberian Jews were converted to Catholicism under duress during the Inquisition, many struggled to retain their Jewish identity in private while projecting

Authors: G. Cledwyn Jenkins
Categories: Social Science
Banished is dedicated to sex offender research, and its issues regarding society, mental health, and the law equally. It focuses on this problem in cultural, le

Authors: Constance B. Hieatt
Categories: Cooking
Adapts over one hundred authentic medieval recipes to the ingredients and equipment of the modern kitchen, providing an abundance of simple and elaborate soups,

Authors: Claudia Roden
Categories: Cooking
The definitive volume on Middle Eastern cooking, a modern classic from the award-winning, bestselling author of The Book of Jewish Food and Claudia Roden's Medi