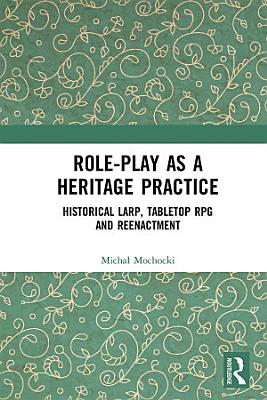 Role-play as a Heritage Practice is the first book to examine physically performed role-enactments, such as live-action role-play (LARP), tabletop role-playing games (TRPG), and hobbyist historical reenactment (RH), from a combined game studies and heritage studies perspective. Demonstrating that non-digital role-plays, such as TRPG and LARP, share many features with RH, the book contends that all three may be considered as heritage practices. Studying these role-plays as three distinct genres of playful, participatory and performative forms of engagement with cultural heritage, Mochocki demonstrates how an exploration of the affordances of each genre can be valuable. Showing that a player’s engagement with history or heritage material is always multi-layered, the book clarifies that the layers may be conceptualised simultaneously as types of heritage authenticity and as types of in-game immersion. It is also made clear that RH, TRPG and LARP share commonalities with a multitude of other media, including video games, historical fiction and film. Existing within, and contributing to, the fiction and non-fiction mediasphere, these role-enactments are shaped by the same large-scale narratives and discourses that persons, families, communities, and nations use to build memory and identity. Role-play as a Heritage Practice will be of great interest to academics and students engaged in the study of heritage, memory, nostalgia, role-playing, historical games, performance, fans and transmedia narratology.

Role-play as a Heritage Practice

Role-play as a Heritage Practice

Games and Narrative: Theory and Practice

Authors: Barbaros Bostan
Categories: Computers
This book provides an introduction and overview of the rapidly evolving topic of game narratives, presenting the new perspectives employed by researchers and th

Authors: Shirley M. Haulotte
Categories: Education
Suitable for practice courses at the BSW or MSW levels, the 40 carefully crafted vignettes in this collection are drawn from actual cases and combine practition

The Journal of the Texas Association for Bilingual Education

Beyond Role and Play