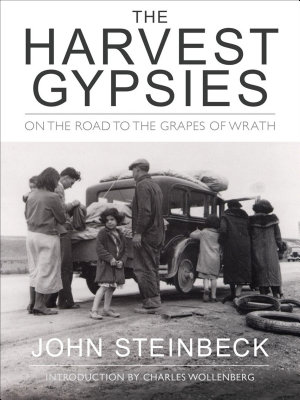 A collection of newspaper articles about Dust Bowl migrants in California’s Central Valley by the author of The Grapes of Wrath, accompanied by photos. Three years before his triumphant novel The Grapes of Wrath—a fictional portrayal of a Depression-era family fleeing Oklahoma during a disastrous period of drought and dust storms—John Steinbeck wrote seven articles for the San Francisco News about these history-making events and the hundreds of thousands who made their way west to work as farm laborers. With the inquisitiveness of an investigative reporter and the emotional power of a novelist in his prime, Steinbeck toured the squatters’ camps and Hoovervilles of rural California. The Harvest Gypsies gives us an eyewitness account of the horrendous Dust Bowl migration, and provides the factual foundation for Steinbeck’s masterpiece. Included are twenty-two photographs by Dorothea Lange and others, many of which accompanied Steinbeck’s original articles. '”Steinbeck’s potent blend of empathy and moral outrage was perfectly matched by the photographs of Dorothea Lange, who had caught the whole saga with her camera—the tents, the jalopies, the bindlestiffs, the pathos and courage of uprooted mothers and children.”—San Francisco Review of Books “Steinbeck’s journalism shares the enduring quality of his famous novel…Certain to engage students of both American literature and labor history.”—Publishers Weekly

Authors: John Steinbeck
Categories: History
A collection of newspaper articles about Dust Bowl migrants in California’s Central Valley by the author of The Grapes of Wrath, accompanied by photos. Three

From Good Ma to Welfare Queen

Authors: Jeffrey D. Schultz
Categories: Electronic books
Celebrates the American writer who in his works confronted and explored the social fabric of the United States in the early 20th century. More than 500 entries

Witnesses to the Struggle

Authors: Anne Loftis
Categories: History
In this groundbreaking interdisciplinary study, Loftis examines the artists who put a human face on the farmworkers’ plight in California during the Great Dep

The Pull of Politics

Authors: Douglas Cazaux Sackman
Categories: History
"Douglas Sackman peels an orange and finds inside nothing less than an American agricultural-industrial culture in all its inventive, exploitative, transformati

Lecture, The Harvest Gypsies: on the Road to The Grapes of Wrath [by] Charles Wollenberg

Authors: Adam Tompkins
Categories: Political Science
Throughout the twentieth century, despite compelling evidence that some pesticides posed a threat to human and environmental health, growers and the USDA contin