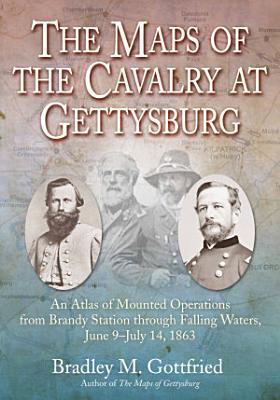 The Maps of the Cavalry in the Gettysburg Campaign: An Atlas of Mounted Operations from Brandy Station Through Falling Waters, June 9 - July 14, 1863 continues Bradley M. Gottfried’s efforts to study and illustrate the major campaigns of the Civil War’s Eastern Theater. This is his seventh book in the ongoing Savas Beatie Military Atlas Series. The Maps of Gettysburg, Gottfried’s inaugural and groundbreaking atlas published in 2007, covered only a small portion of the cavalry’s actions during the seminal campaign. This book addresses that topic in-depth in a way that no other study has ever achieved. Gottfried covers the opening battle of the campaign at Brandy Station in detail, followed by the actions at Aldie, Middleburg, and Upperville, where Jeb Stuart’s cavalry successfully halted Alfred Pleasonton’s probes toward the Blue Mountain passes in an effort to determine the location of Robert E. Lee’s army. The movements toward Gettysburg are covered in a series of maps, including the actions at Westminister, Hanover, and Hunterstown. The five major actions on July 2-3 at Gettysburg take up a considerable portion of the book and include the fight at Brinkerhoff Ridge, and four more on July 3 (Stuart against David Gregg northeast of the town, Wesley Merritt’s fight along Emmitsburg Road, Judson Kilpatrick’s actions near the base of Big Round Top, and Grumble Jones’s near-destruction of the 6th U.S. Cavalry near Fairfield). The cavalry also played a vital role during Lee’s retreat to the Potomac River. The numerous fights at Monterrey Pass, Smithfield, Boonsboro, Funkstown, and Hagerstown were of critical importance to both sides and are covered in detail. The book concludes with the fight at Falling Waters and ends with an epilogue recounting events occurring in Virginia through the end of July. The Maps of the Cavalry in the Gettysburg Campaign plows new ground by breaking down the entire campaign into sixteen map sets or “action sections,” enriched with 82 detailed full-page color maps. These cartographic originals bore down to the regimental and battery level, and include the march to and from the battlefield and virtually every significant event in between. At least two—and as many as ten—maps accompany each map set. Keyed to each piece of cartography is a full-facing page of detailed text describing the units, personalities, movements, and combat (including quotes from eyewitnesses) depicted on the accompanying map, all of which make the cavalry actions come alive. This presentation allows readers to easily and quickly find a map and text on virtually any portion of the campaign. Serious students will appreciate the extensive and authoritative endnotes and complete order of battle, and take it with them on trips to the battlefields. A final bonus is that the maps unlock every other book or article written on any aspect of the cavalry’s actions during this important campaign. Perfect for the easy chair or for stomping the hallowed grounds, The Maps of the Cavalry in the Gettysburg Campaign is a seminal work that belongs on the bookshelf of every serious and casual student of the battle.

The Maps of the Cavalry at Gettysburg

Authors: Bradley M. Gottfried
Categories: History
The Maps of the Cavalry in the Gettysburg Campaign: An Atlas of Mounted Operations from Brandy Station Through Falling Waters, June 9 - July 14, 1863 continues

Authors: Bradley M. Gottfried
Categories: History
More academic and photographic accounts on the battle of Gettysburg exist than for all other battles of the Civil War combined--and for good reason. The three-d

Authors: The Editors of Stackpole Books
Categories: History
• 70 color maps and insightful text tell the hour-by-hour story of the 3-day Battle of Gettysburg • Each map shows the same 3 1/2-by-4 1/2-mile view of the

The Maps of the Cavalry at Gettysburg

Authors: Newt Gingrich
Categories: Fiction
The Civil War is the American Iliad. Lincoln, Stonewall Jackson, Grant, and Lee still stand as heroic ideals, as stirring to our national memory as were the leg

The Maps of the Bristoe Station and Mine Run Campaigns

Authors: Bradley M. Gottfried
Categories: History
The Maps of the Bristoe Station and Mine Run Campaigns is the fifth installment in the Savas Beatie Military Atlas Series. Few historians have examined what hap