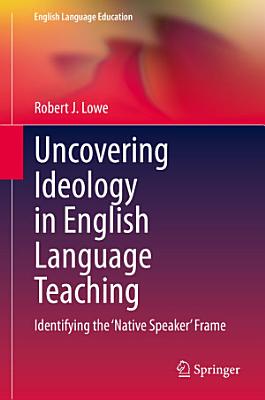 This book introduces the concept of the ‘native speaker’ frame: a perceptual filter within English Language Teaching (ELT) which views the linguistic and cultural norms and the educational technology of the anglophone West as being normative, while the norms and practices of non-Western countries are viewed as deficient. Based on a rich source of ethnographic data, and employing a frame analysis approach, it investigates the ways in which this ‘native-speaker’ framing influenced the construction and operation of a Japanese university EFL program. While the program appeared to be free of explicit expressions of native-speakerism, such as discrimination against teachers, this study found that the practices of the program were underpinned by implicitly native-speakerist assumptions based on the stereotyping of Japanese students and the Japanese education system. The book provides a new perspective on debates around native-speakerism by examining how the dominant framing of a program may still be influenced by the ideology, even in cases where overt signs of native-speakerism appear to be absent.

Authors: Robert J. Lowe
Categories: Education
This book introduces the concept of the ‘native speaker’ frame: a perceptual filter within English Language Teaching (ELT) which views the linguistic and cu

Authors: Robert J. Lowe
Categories: Reference
This book sets out duoethnography as a method of research, reflective practice and as a pedagogical approach in English Language Teaching (ELT). The book provid

Authors: Marcus Callies
Categories: Language Arts & Disciplines
The worldwide spread, diversification, and globalization of the English language in the course of the 20th and early 21st centuries has significant implications

Authors: Karim Sadeghi
Categories: Education
This book brings together the current theory, research and practical perspectives from different parts of the world on language teacher identity in an attempt t

Mid-Atlantic English in the EFL Context

International Perspectives on Diversity in ELT