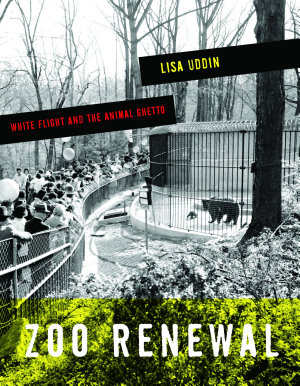 Why do we feel bad at the zoo? In a fascinating counterhistory of American zoos in the 1960s and 1970s, Lisa Uddin revisits the familiar narrative of zoo reform, from naked cages to more naturalistic enclosures. She argues that reform belongs to the story of cities and feelings toward many of their human inhabitants. In Zoo Renewal, Uddin demonstrates how efforts to make the zoo more natural and a haven for particular species reflected white fears about the American city—and, pointedly, how the shame many visitors felt in observing confined animals drew on broader anxieties about race and urban life. Examining the campaign against cages, renovations at the National Zoo in Washington, D.C. and the San Diego Zoo, and the cases of a rare female white Bengal tiger and a collection of southern white rhinoceroses, Uddin unpacks episodes that challenge assumptions that zoos are about other worlds and other creatures and expand the history of U.S. urbanism. Uddin shows how the drive to protect endangered species and to ensure larger, safer zoos was shaped by struggles over urban decay, suburban growth, and the dilemmas of postwar American whiteness. In so doing, Zoo Renewal ultimately reveals how feeling bad, or good, at the zoo is connected to our feelings about American cities and their residents.

Authors: Lisa Uddin
Categories: Social Science
Why do we feel bad at the zoo? In a fascinating counterhistory of American zoos in the 1960s and 1970s, Lisa Uddin revisits the familiar narrative of zoo reform

The Zoo and Screen Media

Authors: Michael Lawrence
Categories: Performing Arts
This book is the first critical anthology to examine the controversial history of the zoo by focusing on its close relationship with screen media histories and

Authors: Frank Noelker
Categories: Nature
The fifty color photographs in Frank Noelker's Captive Beauty are not simple, uncomplicated shots of animals in zoo settings; there is an ambivalence in them th

Street Art in the Middle East

Authors: Sabrina de Turk
Categories: Art
Since the 2011 Arab Spring street art has been a vehicle for political discourse in the Middle East, and has generated much discussion in both the popular media

Authors: Ann C. Colley
Categories: Literary Criticism
What did the 13th Earl of Derby, his twenty-two-year-old niece, Manchester’s Belle Vue Zoo, and even some ordinary laborers all have in common? All were avid

Portrait and Biographical Record of Johnson and Pettis Counties, Missouri

Authors: Jo-Anne McArthur
Categories: Art
Drawn from a thousand photos taken over fifteen years, We Animals illustrates and investigates animals in the human environment: whether they're being used for

Thought to Exist in the Wild

Authors: Derrick Jensen
Categories: Zoos
Provides a history of zoos, examines the faults of zoos, and argues for their dissolution.